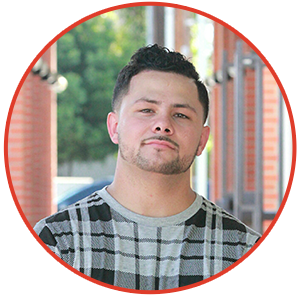 Meet Jose Rodriguez. Jose has had to overcome many obstacles in his short lived life. As Jose grew up in the inner city of Tulsa, Oklahoma, he was exposed to the world of drugs, gangs, poverty, and hopelessness. During his childhood, Jose’s father was heavily involved in both the distribution and use of drugs. At the age of 12 years old, Jose watched as his father was sent to prison, and Jose quickly made some choices that would determine the rest of his life. He joined a gang, began doing drugs, and began fighting, all of which led to Jose doing poorly in school.

Through God and the help of several individuals, Jose was able to come out of that lifestyle at the age of 17 years old. He has since gone on to be the first in his family to graduate from high school. The following year he attended Victory Bible Institute where he developed a passion to go after teenagers who are in the same position he found himself in. Since then he also went on to be the first person in his family to graduate a four year university in which he earned a Bachelor’s Degree in Youth Ministry from Oral Roberts University.

During his time at Oral Roberts University, he co-founded a dance team that quickly exploded. His dance team, Urban Sent, traveled to over 10 states and performed in front of more than 20,000 people through the short 3 years that they existed. That season of his life has now come to an end but has allowed him the experience needed to become an effective communicator with a powerful message. Jose has traveled all over the country dancing and speaking to teenagers in a wide variety of venues such as juvenile detention centers, crusades, public schools, churches, outreaches, and many other venues.

For over 10 years Jose has had a passion to rescue urban youth. With a degree in Youth Ministry and a testimony of God rescuing him out of gangs, drugs, and poverty; he has both life experience and an education to help him empower others to Rescue a Generation of Urban Youth. Jose is now a full time urban missionary and currently serves as the Student Ministries Pastor at his church, Kingdom Culture Worship Centre in San Bernardino, CA. Jose provides training on behalf of Urban Youth Workers Institute (UYWI) and speaks at conferences, camps, and youth groups across the nation.